This city-owned land at N. 4th and Calder streets is the future townhouse site as part of a new development plan for the MarketPlace neighborhood.

There’s a new plan for a large strip of Midtown Harrisburg, as the city’s redevelopment agency has selected a developer for dozens of long-empty lots.

At a meeting on Friday, the Harrisburg Redevelopment Authority selected the city-based development team of Chris and Erica Bryce and Harrisburg Commercial Interiors (HCI) to complete the unfinished development of MarketPlace, consisting of 67 lots spread across Reily Street and the Broad Street Market area. .

The unanimous vote gave the developers permission to move forward with their plan, which includes a mix of single-family townhouses, small apartment buildings, and mixed-use commercial space.

“I am very happy with this decision,” said Chris Bryce after the meeting. “I think what happened will be great for the future of Harrisburg.”

Their plan defeated a competing proposal from Philadelphia-based Odin Properties and Harrisburg-based RB Development, which also sought “designated developer” status for the lots.

The authority voted 3-0 for the Bryce / HCI proposal, although members did not say why they made their choice.

After the vote, RB Development’s Ryan Sanders declined to comment on the authority’s decision.

Both developers are currently active in the Midtown area.

Last year, the authority chose Bryces / HCI to develop dozens of vacant lots that are part of the unfinished Capitol Heights project just across Reily Street.

They have since received permission from the city to begin the first phase of this project, which includes a small apartment building, community center, and townhouses along the 1,600 blocks of N. 3rd and Logan Streets. The project is slated to kick off in October, according to HCI’s Matt Long.

Just a few weeks ago, RB Development received zoning board approval for Bethel Village, a low-income senior housing development in N. 6e and Herr streets. The project is now in the process of obtaining final approval by city council.

In their proposal for MarketPlace, the Bryce / HCI development team envisions a total of 104 to 120 housing units, including apartments and townhouses for sale. Thirty to 40 people will be considered affordable, bringing the project into line with the city’s recently passed affordable housing law, Long said. 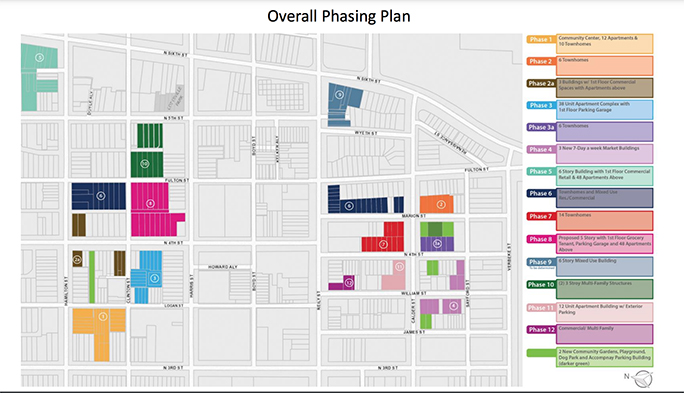 The MarketPlace lots have a long history stretching back decades, when the city began to clean up the area of ​​abandoned and dilapidated buildings.

In 2005, State College-based S&A Homes were chosen to expand the existing townhouse community, but they stopped building in 2009, leaving dozens of lots empty.

Two years ago, the redevelopment authority bought back the vacant lots and chose Harrisburg-based Seven Bridges Development to complete the project, but that company never started construction, which led the authority looking for a new developer.

Long said he expected MarketPlace development to begin early next year with the townhouse component, with a two-year construction deadline for the entire project. First, developers will have to buy the vacant land at city market rates, Bryce said.

In addition to townhouses and apartments, the project includes new parking, several green spaces, a dog park and commercial spaces on the ground floor.

“I can’t wait to put the shovel in the ground,” Long said after the game. ” I am excited to begin. “

If you like what we do, please support our work. Become a friend of TheBurg!